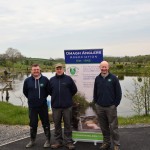 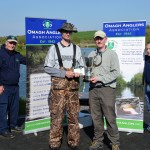 We had another successful event at the Birchwood Fishery this year .We had 38 anglers at the event with 11 juniors .The weather was much improved from this time last year which had provided us with gales and hail and sleet showers. The morning session was overcast but unfortunately for the anglers we had a cloudless sky in the afternoon and the fishing was indeed very difficult. We had our usual prizes and this year the Loughs Agency and Lionel Knobbs sponsored 5 of the spot prizes for the Association. A lot of trout were taken on the buzzers with others taking dryfly. The spot prizes were given out first trout caught in each session(Morning and Afternoon) and also for the most improved junior on the day. Simon Harkness and Gary Wolfe won the adult prizes and Jordan Mc Farland and Jamie Smithson won the junior prizes. Oran Mc Elroy was the winner of the most improved junior prize.

The Courtney Cup for juniors was this year won by Jordan Mc Farland  for the heaviest trout. He had a great day and could have featured in a number of the prizes, he knows the fishery very well! We had a tie for second place with R. Lyttle, C Wormersly, James Mc Farland and S Colton all finishing with the same number of trout  so all received a prize. Shane Colton got third prize for the second heaviest trout. Jordan received a new rod and a trophy to go with the spot prize that he had already got for first trout caught in the morning session.

The Mc Bride Cup was fished for by the adults and in 3rd place was S. Martin , in second place was again a joint prize as both Aidan Loughrey and Alan Mc Farland caught the same number of trout and the winner of the Mc Bride Cup was Ricardaus Trainausas known locally as Ricardo with a superb rainbow of 7.95lb. Ricardo received a Voucher for Andersons for £100 plus a trophy to keep. 2nd and 3rd place also got vouchers for CA Andersons for £75 and £50.
Many thanks to all the guys from the committee(Maurice, Tommy, Richard, Brian and Robbie) who helped on the day recording numbers of fish and weights  and for Shane Colgan helping the juniors with their casting technique and fly presentation.