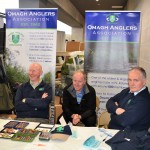 Shane , Brian and Tommy at our stall at the North West Angling Festival 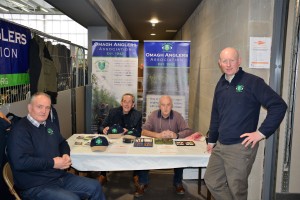 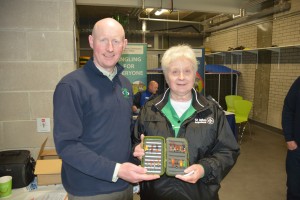 We took a stall at the North – West Angling Festival this year for the first time in a few years and it was a resounding success. We had a number of members manning the stall and we were all kept quite busy with queries on the fishing especially the trout fishing.

As part of the participation at the festival we usually run a small raffle to raise funds for a local charity. This year we supported the Omagh and District Branch of the Multiple Sclerosis  Society.

We had some great prizes with Omagh Anglers putting forward a wading jacket and a days fishing for two people . The ever generous fly tiers who display their skills at the show were  fantastic and we had a further five prizes from them and also three of the local shops. CA Andersons, NM Tackle and River Mourne Guns and Tackle Ltd sponsored fly boxes for the raffle. I would also like to thank John Martin , Joe Mc Donald, Don Mc Closkey (Snr) , P. Grieve and F Moore for the quantities of flies they provided for the raffle. There would have been a few hundred pounds in salmon and sea trout flies handed over to the Club for the draw. Many thanks to their great generosity.

We conducted the draw at 4.30pm on the sunday afternoon with S Cullinan of the Loughs Agency and Richard Turner from DAERA drawing out the prize winners  and the prizes and winners were :

As I had said earlier  the funds raised were going to Omagh And District MS Group. Almost £400 was raised through the draw. I would like to thank everyone who gave generously to this cause and all who were involved in supporting the stall and selling tickets with special mention going to Kenny Harvey for his great help on the ticket front!