The Association has been engaged in a protracted dispute with Camowen Anglers Association who disputed the validity of the rights. As a result of the court proceedings and subsequent judgement made in favour of Omagh Anglers Association, Camowen Community Anglers representatives have now agreed to abide by Court Orders contained within the Declaration of Rights awarded on 2nd June ,2017.

Omagh Anglers Association wish it to be noted that they have secured confirmation of their fishing rights in the areas outlined below:

Camowen Community Anglers have also agreed as part of the Court Order ,‘not to erect any signage which may suggest that they enjoy fishing rights in the area, to undertake to remove any signage which is already erected in the area and that they and their agents will not sell permits to fish on the said area . Camowen Anglers , their servants and agents shall not obstruct any person who has purchased a permit from Omagh Anglers or who enjoys a right to fish in the said area’.

With immediate effect anyone caught fishing in the above mentioned areas without a valid Omagh Anglers Association permit will be liable for prosecution on the grounds of trespass on a Several Fishery and both Omagh Anglers ‘ Bailiffs and Loughs Agency River Watchers will be authorised to check that anglers have valid permits.

Having spent in excess of £100,000 on the development of nursery streams and spawning beds on the River Camowen and its tributaries Omagh Anglers Association were compelled to defend this infringement of their legally held fishing rights and are delighted to have had these rights formally upheld in court. The Association has been supported in seeking legal redress by Mary Murnaghan (Murnaghan and Colton Solicitors), Michael Mc Crea BL, Kevin Mc Vitty MIRCS Neil Campbell Faris(Expert Conveyancer) and Richard Rountree and wishes to express their appreciation to all involved.

Since 1943 Omagh Anglers Association has worked steadfastly in pursuing its initial aims to protect and maintain access to local fishing in the Omagh area. Omagh Anglers will celebrate their 75th anniversary in 2018 and intends to continue to protect and enhance the fishing around the Omagh area in line with the Associations Constitution so that this wonderful sport will continue to be available to locals and visitors for generations to come. 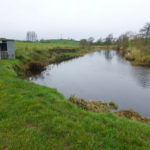