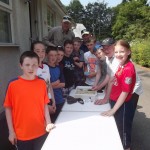 Checking out some of the bugs collected from the river bed.

Omagh Anglers Association recently organised an angling development day for young people in the Omagh area. The day was co-ordinated by Shane Colgan and we were fortunate to have the services of Packie Trotter of APGAI-Ireland to put everyone through their paces. We are grateful for the help provided by Seamus Cullinan of the Loughs Agency for the use of his offices in Omagh as a base during the day. The day was a great success with hopefully ten new budding anglers in the making.

Packie gave a slide show in the morning touching on health and safety at the riverbank and went on to talk about the lifecycle of trout and salmon and also the life cycle of the trout’s basic diet, touching on upwinged flies, flatwinged flies and roof – winged insects. This was of great interest to all present. After a short break for lunch Packie then gave a casting demonstration and broke down the mechanics of how to cast a fly rod. This was followed up with a session for the children on how to cast and a practise session for them to develop their new skills. All the children involved became quite competent casters after the lesson learning how to set up the rods and overhead casting with some line shooting added in.

When this was finished we gathered again at the Loughs Agency Office in Omagh where we had some  live samples of the different types of insect life that occur in and around the river such as cased caddis, agile darters , nymphs and shrimps. The children were then shown some of the artificial flies that anglers use that would match these different insects.

At the end of a great day the children were awarded a certificate of attendance for taking part in the day and also a large poster showing all the fish species in and around Ireland.

Again we would thank Shane for organising the event, Packie Trotter for the days coaching , the parents for encouaraging the kids to have a go 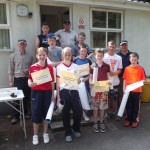 Participants at the coaching event with Packie Shane and Terry

and Seamus Cullinan for the use of Loughs Agency premises.