Rainbows, the problems and moving forward.

Working with FASTA this is the Loughs Agency press release. This is a very positive statement going forward. We (FASTA) are also liaising with Dawnfresh Ltd to provide dumping points for any rainbows caught that have to be disposed of . We do not want to see the river banks polluted with carcasses which can lead to further pollution, spread of disease and cause increases in predation to our native stock of brown trout , sea trout and salmon. As soon as we have any information regards these collection points we will post again  to let our members know where they can dispose of the rainbow trout carcasses. Thank you to all anglers who re removing these trout at present! 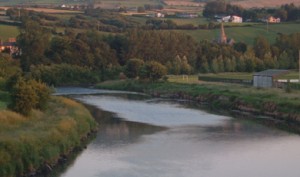 The Ladies , on the Strule, just above Newtownstewart

After the devastating floods in August 2017, official figures have quoted an estimated 387,000 rainbow trout escaped from a fish farm in Newtownstewart into the River Strule.  At that time, Loughs Agency carried out an initial assessment of the damage caused to the fishery habitat and raised concerns with the Department of Agriculture, Environment and Rural Affairs (DAERA) Marine and Fisheries Division, who are the licencing authority for fish farms in Northern Ireland.

As part of our fisheries management response, our scientific staff undertook a number of initiatives including electrofishing and fyke netting to inform what actions could be undertaken to remove the farmed fish from the rivers and to conserve and protect the native fishery.

Independent expert opinion was sought from Prof Ken Whelan, one of Ireland’s foremost Fisheries Scientists.  Drawing on his years of expertise in the field, Prof Whelan conducted a review into the rainbow trout escape.  The findings of the report have been used by the Loughs Agency to inform our decision making regarding the rainbow trout.  The report is available from the Loughs Agency website.

In the months since the event, Loughs Agency has been conducting regular scientific angling based surveys to analyse the movement of the rainbow trout, identify areas of greatest concentration, analyse what they have been feeding on and undertake other analysis.  Through these assessments we have identified that while some of these fish have moved downstream, the majority of these fish are still concentrated in the lower Strule, lower Derg and upper Mourne.

To date, more than 500 rainbow trout have been examined by Loughs Agency scientists, and stomach analysis has identified they have been feeding on a variety of material.   As farmed fish, they have relied on food being provided in the form of pellets and have a poor ability to hunt for food.  However, invertebrates were also recorded in the stomach contents and the Agency will continue to monitor their ability to adapt to invertebrate prey.

Sharon McMahon, Designated Officer at Loughs Agency said ’we will continue to work with the relevant statutory agencies to ensure robust biosecurity mechanisms are put in place at fish farms within our catchments to prevent or minimise the risk of further escapements.   We have been, and will continue to, engage with local angling clubs and umbrella bodies such as the Foyle Association of Salmon and Trout Anglers (FASTA) to inform and update anglers as the situation progresses’.

FASTA have issued a statement on the matter to their members and Loughs Agency appreciate their support and the support of the wider angling community.

In a statement FASTA explained ‘we fully understand that the rainbow trout incident is a highly emotive matter to all game anglers.  Loughs Agency staff are the lead agency on the conservation issue alone and are as equally concerned about the seriousness of the situation that the angling community faces.  It must be stressed that Loughs Agency are partners with FASTA in moving this problem forward.  I would encourage everyone to engage our focus and energy as a team and pull hard in the same direction.  Doing nothing is not an option’.

The Agency appreciates the concerns of anglers and greatly values the efforts anglers have made in removing rainbow trout from the rivers.  The Agency encourages anglers to continue with this and would ask that they report their catches to Loughs Agency.  A reporting sheet is available from the Loughs Agency website.  This sheet is only to be used for reporting on catches of rainbow trout in rivers within the Foyle system and excludes still water lakes.  This information will be used to monitor how many fish have been removed, their size and location.   Any rainbow trout which are over 30cm in length should be given to the Agency so that we can conduct further analysis. Please contact the Agency directly on 02871 342100 if you catch a fish of this size to arrange for collection.

Anglers are also asked not to discard rainbow trout on the river banks as this can lead to an increase in predator pressures.  If there are disposal issues, Loughs Agency Fishery Officers will, if possible, collect fish that have been captured.  Anglers are asked to contact the Agency directly on 02871 342100 to make arrangements.